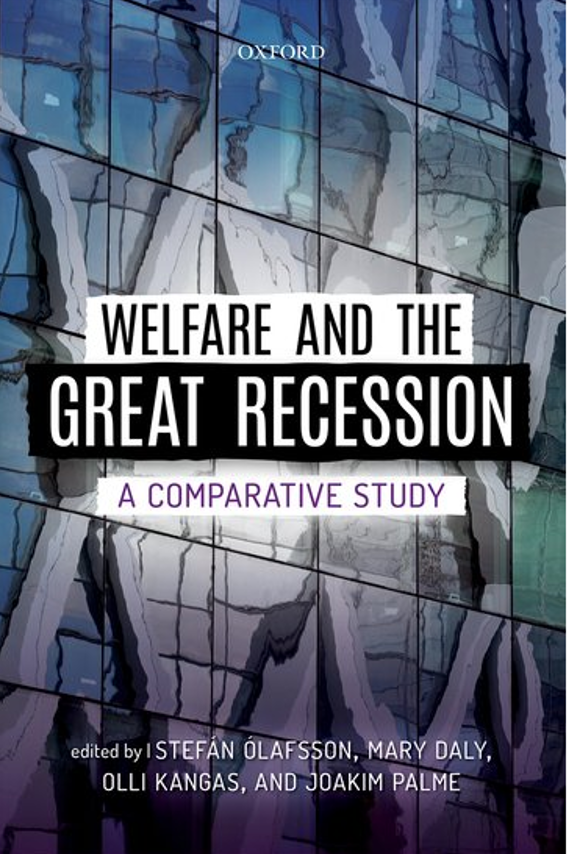 Welfare and the Great Recession

Welfare and the Great Recession: A Comparative Study is edited by EDDA researcher Stefán Ólafsson along with Mary Daly, Olli Kangas, and Joakim Palme and published by Oxford University Press and published in 2019.

The edited volume focuses on the consequences of the European financial crisis on welfare and how the burdens of the recession differ between countries, socio-economic groups, and within countries. Furthermore, the book offers new evidence demonstrating that when it comes to sheltering populations from serious economic contraction, the importance of the welfare state and government policies is significant.

Welfare and the Great Recession is divided into two parts: first, Comparative Profiles, Theories, and Policies, and second, Country Case Studies of Greece, Spain, Ireland, Iceland, Finland, UK, Denmark, Norway, and Sweden. It uses comparisons of thirty countries with an in-depth study of the nine countries to offer various lessons from the experience of the financial crisis in Europe. It reflects on welfare futures in a globalized crisis-prone environment.

With a focus on household level welfare consequences, this edited volume relates financial hardship to institutional characteristics such as welfare regimes, currency regimes, socio-political patterns, affluence levels, public debt, and policy reactions to periods of crisis. The study takes into account stimulus versus austerity, the degree of social protection emphasis, the commitment to redistribution, and the significance of activism. 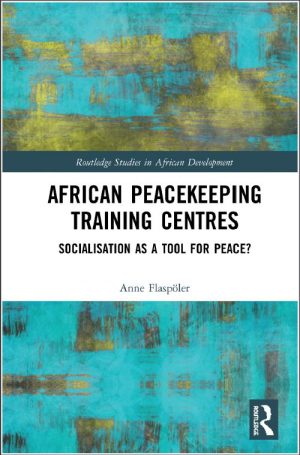 Socialisation as a Tool for Peace

The book by EDDA Researcher Anne Flaspöler, African Peacekeeping Training Centres: Socialisation as a Tool for Peace? is published by Routledge in 2018. The publication was supported by the EDDA Center and the United Nations University Gender Studies and Training Programme.

The book’s analysis is based on two contrasting case studies, selected to show the spectrum of training centres operating in Africa, namely the Kofi Annan International Peacekeeping Training Centre in Accra, Ghana and the African Centre for the Constructive Resolution of Disputes in Durban, South Africa. 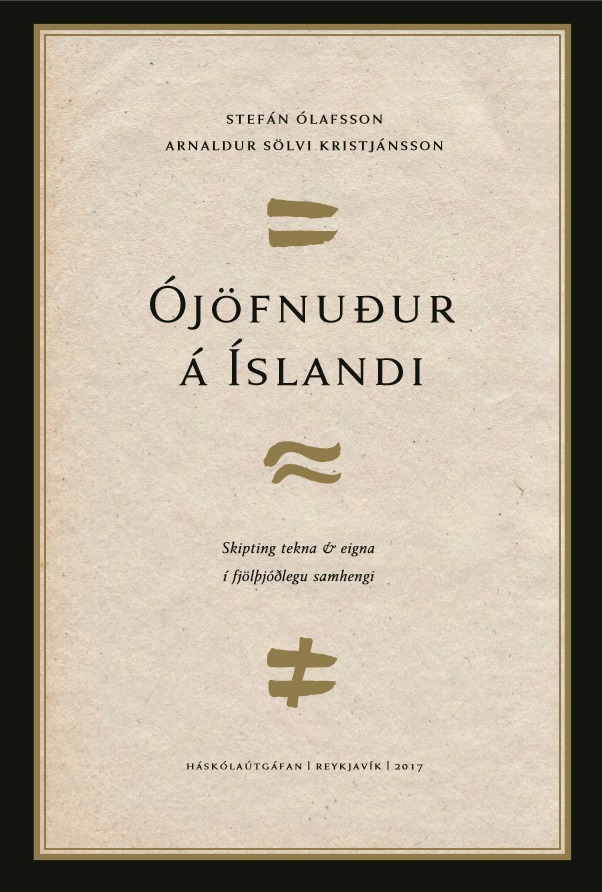 Distribution of Income and Wealth in an International Context

Ójöfnuður á Íslandi: Skipting tekna og eigna í fjölþjóðlegu samhengi [Inequality in Iceland: Distribution of Income and Wealth in an International Context] is published by the University of Iceland Press in cooperation with the EDDA center. The book covers the period from 1927 to in 2017, the year of its publication. It shows that inequality was quite pronounced before the Second World War. From the 1940s onward, the distribution of both income and wealth became much more equal. For about half a century, Iceland, along with the other Nordic countries, probably had the world’s highest level of equality. This age of equality was a period of extensive economic growth, rapid modernization of society and the economy, improved standards of living and the build-up of a Nordic-style welfare state.

Financial incomes increased rapidly from the late 1990s to 2007, but flowed primarily to the top income groups. The added impact of a shifted tax burden from higher to lower and middle incomes, increased inequality. The result was a greater increase in income inequality than previously seen in any other Western country since the mid-1950s. The financial collapse of 2008 then reversed this development, with Iceland once again moving towards more equality. The last three years have seen signs of a renewed shift to increased inequality.

The authors provide international comparisons of top-income shares and other measures of income and wealth distributions, including data from Thomas Piketty and Anthony B. Atkinson and their colleagues, the OECD and Eurostat. The period from 1992 to 2015 is analysed and various drivers of equality and inequality are assessed and weighted using advanced statistical methods.

Inequality in Iceland is a book about the fundamental forces that shaped Icelandic society from the early 20th century to the early 21st century, politics and the evolving standards of living of the population. 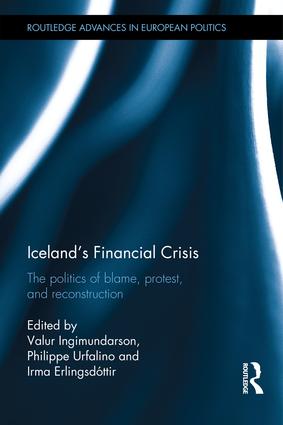 The Politics of Blame, Protest, and Reconstruction

Iceland’s Financial Crisis: The Politics of Blame, Protest, and Reconstruction is edited by Valur Ingimundarson, Philippe Urfalino, and Irma Erlingsdóttir and published by Routledge in 2016. The work originated in an EDDA-sponsored transnational collaborative research project and the Center’s international conference In/Equalities, Democracy, and the Politics of Transition.

The edited volume deals with the political, economic, social and legal responses to the collapse of the Icelandic financial system in 2008. Interdisciplinary, with contributions from historians, economists, sociologists, legal scholars, political scientists, and philosophers, the book also compares and contrasts the Icelandic experience with other national and global crises. It examines the economic magnitude of the crisis, the social and political responses, and the transitional justice mechanisms used to deal with it. It studies both backward-looking elements, including a societal and legal reckoning—which included the indictment of a prime minister and jailing of leading bankers for their part in the financial crisis—and forward-looking features, such as an attempt to rewrite the Icelandic constitution. Throughout, it underscores the contemporary relevance of the Icelandic case. While the Icelandic economic recovery has been much quicker than expected, it shows that public faith in political elites has not been restored.

The manuscript is divided into three parts: the first section focuses on economic aspects. It puts the Icelandic financial crisis into a historical international framework, analyses the relationship between political and business interests in Iceland, and explores the boom and bust cycles of Iceland’s economy. The second section engages the political and societal responses to the banking collapse, with emphasis on the role of protest movements, on the restorative and retributive mechanisms used to deal with financial crash, and on questions of political practices and accountability in Iceland. The third part is a case study on the constitutional-writing process in Iceland, which was an attempt to achieve “democratic renewal” and to restore political legitimacy after a societal trauma. 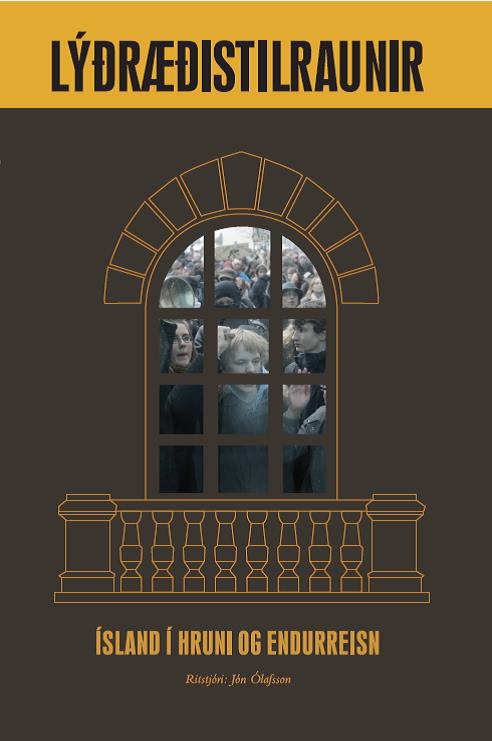 Iceland in Crisis and Recovery

Lýðræðistilraunir: Ísland í hruni og endurreisn [Democratic Experiments: Iceland in Crisis and Recovery] is edited by Jón Ólafsson and published by EDDA, in cooperation with University of Iceland Press and with the support of Bifröst University, in 2014.

The aftermath of Iceland’s financial crash in 2008 was characterized by loud demands for new approaches in politics and more public involvement in policy and decision-making. Grassroots activity increased, and in the eyes of many citizens it was vital for Icelandic society to go through democratic renewal in order to respond to and draw necessary lessons from the crisis. National forums were convened; a Constituent Assembly was elected and the City of Reykjavik experimented with participatory budgeting, to name a few innovations that resulted from the crisis – directly and indirectly. 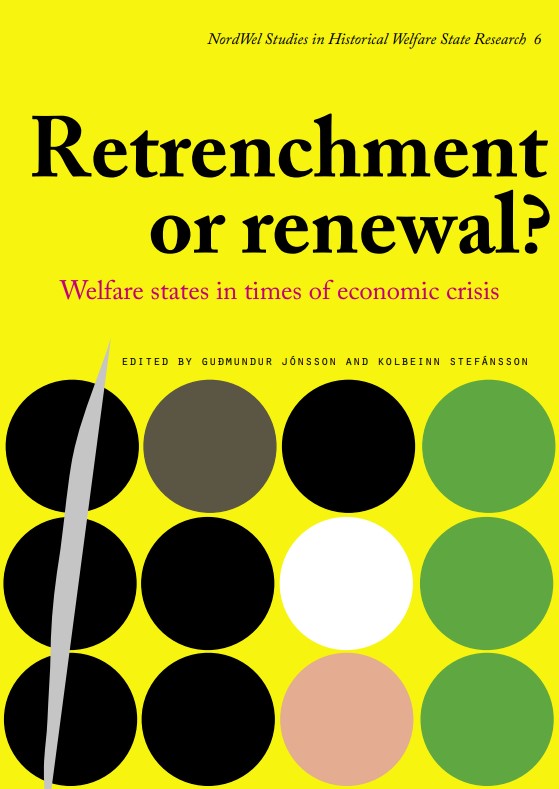 Retrenchment or renewal? Welfare states in times of economic crisis is published by EDDA, in cooperation with the Nordic Centers of Excellence NordWel and REASSESS, in 2013. The work is part of a book series initiated by NORDWEL (The Nordic Welfare State – Historical Foundations and Future Challenges). The editors are Guðmundur Jónsson and Kolbeinn Stefánsson.

The global economic crisis, which began in 2008, has posed serious challenges to welfare states and shaken their financial, social and political foundations. This book analyzes the impact of what has become the worst economic crisis since the Great Depression on social policy and welfare state developments in Europe and North America.  The varied national experiences are examined and put into a wider intellectual and historical context. The book poses such questions as the following: What has been the impact of the current crisis on social policy? Has the crisis heralded a new phase of entrenchment and austerity or are there signs of opportunities opening up for progressive social reform?

The volume – a collection of 16 chapters by authors from different disciplines within the humanities and the social sciences – provides a broad overview of the present crisis and its implications for the future development of the welfare state.  It contains both general surveys and country-specific studies, dealing with a range of issues.