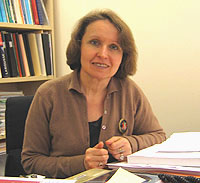 Public Lecture: The Globalization of Migration: the Case of Southern Countries

Research professor Catherine de Wenden, research director and teacher at the Center for International Relations at the Sciences Po-University in Paris and the La Sapienza-University in Rome, will give a public talk entitled “The Globalization of Migration: the Case of Southern Countries” on Friday 13 September 2013. The lecture will be held at the Lögberg building, room 101, University of Iceland at 12:00. The lecture is held in collaboration with the Institute of International Affairs at the University of Iceland and the French Embassy in Reykjavik.

In her lecture, Catherine de Wenden will focus on southern countries and illustrate them as departure points, a final destination or a transit place. This discussion will shed a light on contemporary migration systems. De Wenden calls for a global governance of migration, in order to make migration less precarious and more beneficial to the migrants themselves as well as to societies of destination and origin.

Migrants make up approximately 3% of the world’s population and they are a very diverse group. Women and urban dwellers are for example a larger part of the group than before. There can be several reasons as to why people migrate. Some move because of poverty, young graduates may decide to study abroad or seek better job conditions and retirees often decide to move to enjoy a milder climate.

Catherine Wihtol de Wenden is a political scientist, sociologist and lawyer and specialises in international migration. She works as a research director and teacher at the Center for International Relations at the Sciences Po-University in Paris and the La Sapienza-University in Rome. She has been a consultant for several international organizations as well as being the author of numerous books, including Atlas mondial des migrations, which was released in 2012.