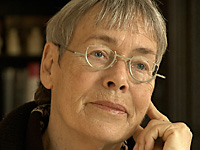 On Friday 16 September, Dr. Margrit Kennedy, an architect, an ecologist, a financial expert and a critic of the prevailing economic system, will give a public lecture entitled: “If Money Rules the World – Who Rules Money?”. The talk will take place in Háskólabíó – Miðjan at 12.00-13.00.

EDDA´s Public Forum is a venue for lectures, debates, discussions and happenings that address a broad audience. The Public Forum is a space for discussing topical social and political issues in which the public is engaged or confronted with.

Dr. Margrit Kennedy is an architect, an ecologist, a financial expert and a critic of the prevailing economic system. As professor she headed the department of “Technological Advancement and Resource Efficient Construction” at the University of Hannover’s architecture school. As early as 1982 she recognized that the broader application of ecological principles was inhibited by fundamental flaws in the monetary system, especially the consistent need for economic growth resulting from interest and compound interest.

Through her continuous research and scrutiny she became an expert on the subject, working on practical solutions for essential problems:

How can we create a sustainable monetary system?

What characterizes monetary systems that do not collapse repeatedly and which serve us rather than control us?

Where can we find examples of well-working monetary systems in the past and present?

How does the money system have to be in order not to continually redistribute wealth from the large majority to a small minority?
In 1998 Kennedy published with Declan Kennedy and Helmut Creutz the book Interest and Inflation Free Money: Creating an Exchange Medium That Works for Everybody and Protects the Earth.  This book has been translated into 22 languages.
She founded Money Network Alliance in 2003 for the research and development of complementary currencies. For further information about Margrit Kennedy see http://www.margritkennedy.de/ og http://www.monneta.org/

The talk is hosted by EDDA – Center of Excellence in collaboration with The School of Engineering and Natural Sciences at the University of Iceland and Future Iceland (Framtíðarlandið).