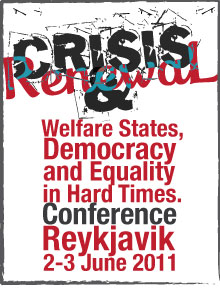 The economic crisis of 2008–2010 has had a major impact on the social and political systems of European states from Greece in the South to Iceland in the North. It puts an increased strain on the welfare state which now faces the double burden of growing needs and reduced resources. In many countries, the crisis has seriously undermined established social rights and caused political turmoil in which fundamental issues about political legitimacy, governance and responsibility have been called into question.

The conference draws together researchers from diverse disciplines such as sociology, history, philosophy, gender studies and public health from a variety of regions in order to share experiences and insights about the causes and consequences of the global financial crisis and how it will affect well-being, gender equality, social justice and the welfare state.

The keynote lectures are the following:

The conference is open to the public. Admission is free of charge.