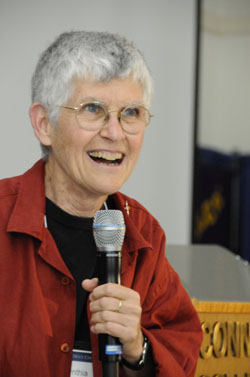 How long does ‘Post-War’ last for Women? Some Feminist Clues

On Thursday, 14 October, Dr. Cynthia Enloe, Research Professor at Clark University in the USA, will give a public lecture titled “How long does ‘Post-War’ last for Women? Some Feminist Clues“. The lecture is hosted by the Gender Equality Training Programme, the Centre for Women’s and Gender Research and EDDA – Center of Excellence at the University of Iceland. The lecture will take place in Hátíðarsalur, Main Building of the University of Iceland at 16.00 – 17.30.

Dr. Enloe will address some key questions such as: How does the war’s aftermath ripple onward, long after the treaties are signed and the guns have gone silent? In stories told, and stories not told; in care of veterans; in choices about what is memorialized and what is forgotten? And how do they play out differently for women and for men and what are the consequences?

The lecture is open to and will be given in English.

In years past, Dr. Enloe’s feminist teaching and research has focused on the interplay of women’s politics in the national and international arenas, with special attention to how women’s labour is made cheap in globalized factories (especially sneaker factories) and how women’s emotional and physical labour has been used to support governments’ war-waging policies – and how many women have tried to resist both of those efforts. Racial, class, ethnic, and national identities and pressures shaping ideas about femininities and masculinities have been common threads throughout her studies.